Time to brag again.  I serve a talented group of people. You may ask, “Yeah, well what makes you say that?” 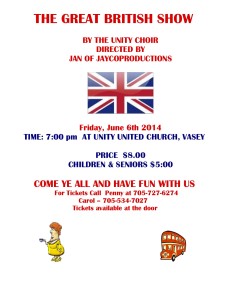 Well, can YOUR group of people put on an original musical production (well, original in the production sense of the word—the music is all well known) complete with singing, dancing, props and costumes having only rehearsed for a couple of months? *crickets chirping* I didn’t think so. Janet Antebi is the founder  of JAYCO productions. Unity is blessed by her presence in our church. She has put on a number of shows throughout the local community and the province. She has graciously offered her theatrical, musical and directorial gifts to our church. With the help of the Unity congregation and choir she has put together   “The Great British Show”.  Why “Great British”? Well, it was inspired by Victoria Day and -initially- the show was supposed to run very close to that day .  The date changed due to a scheduling conflict but the theme stayed the same. So, come on out to the Great British Show: FRIDAY, JUNE 6, @ 7pm. Read the poster for details. FOR TICKETS: Call Penny: at 705-727-6274 or Call Carol: at 705-534-7027 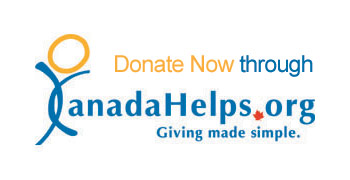